Luis has extensive experience in the fields of law, business, public administration. He practiced as a lawyer for several years in his own law firm in London and Madrid.

He has been a member of the Board of Directors of COMFERSA, EMSFM, EMT, CANAL DE ISABEL II and has extensive experience in SMEs and particularly in their internationalization processes.

Luis has extensive experience in crisis management in both the private and public sectors. During his time as a lawyer he acted as Counsel before all Spanish courts, national and international arbitration institutions as well as an expert witness of Spanish law before the Court of Justice of London.

During his time in the public administration he obtained a wide knowledge of budget management, urban planning, public contracting, licenses and authorizations, concessions and project management.

Luis Asúa is a lawyer who combines great experience in public and private affairs with a deep knowledge of English and French culture and languages.

Further information can be provided upon request at info@moscardo.legal 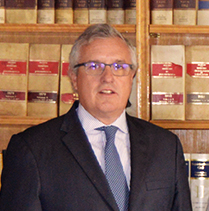