He obtained his PhD in Commercial Law at the Complutense Univeristy of Madrid in 2019.

His thesis is titled “Mutual Insurance companies un the XXI century”and he has been awarded the prize for the doctoral thesis by the Royal Academy of Doctors of Spain in 2020.

Since graduation, he has collaborated as a professor at the Complutense University of Madrid, lecturing in commercial law and for the Master in Legal Practice at CES Cardenal Cisneros.

He currently combines his teaching activity with his work as counsel focusing on commercial and corporate law, insurance, civil and commercial contracts, leases, among other matters. He acts as co-counsel in national and international commercial litigation and arbitration under the main institutions.

The Royal Academy of Doctors of Spain – Doctoral Thesis Award (2020)

SEAIDA (Spanish Section of the International Association of Insurance Law)

Further information can be provided upon request at info@moscardo.legal 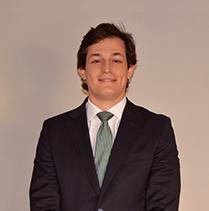